The Recipe
For the tortillas
Muffin tin (I bet those ‘tops only’ muffin tins would also work)
12 slices of Yukon gold potato cut 1/8th of an inch thick
Enough sliced white onion to add a thin layer to each tortilla
8 large eggs
¼ -1/2 cup extra virgin olive oil
Salt and pepper to taste
Preheat oven to 350. Place 1 potato slice, onion, and 1 tsp of olive oil in the bottom of each muffin tin- bake until potato and onion are tender- about seven to ten minutes. Whisk together the eggs, salt, pepper, and a splash more olive oil. Evenly divide egg mixture between muffin cups and return to oven. Lower heat to 300 and bake until egg is cooked through. Remove from oven, allow to cool, and invert onto a cookie sheet. Serve warm or at room temperature.
I confess— I completely bastardized the concept by adding a splash of half and half to the egg mixture so these really only bear a passing resemblance to their old world kin but they still captured the subtle flavor of the original and were so addictive that all twelve mysteriously disappeared last night leaving nothing for leftovers.
For the salad
Baby spinach (such as DOLE salads Baby Spinach)
Diced Pimentos or I bet those sweet hot peppers would be awesome
Sliced mushrooms (I used Shiitakes because I’m a fancy pants and had some in the fridge already)
Spanish Chorizo cut into decorative bite sized pieces
There are no quantities for the spinach, mushrooms, and peppers because it seems like you should put how ever much of any or all of them that you want. So when you are ready to eat assemble the above in a bowl.
For the Dressing
Three slices of bacon
¼ cup Sherry vinegar
½ tsp honey
½-1 tsp mustard (I used my homemade country style Dijon)
Some fresh ground pepper
Dice the bacon and cook until crispy. Strain out bacon bits and set aside on a paper towel to drain. Leave about two tablespoons of bacon fat in the pan. When you are ready to serve, put the bacon bits back in the pan, whisk in the sherry vinegar, honey and Dijon and reheat over medium just until hot.

Pour hot dressing over entire salad and lightly toss. Nestle in a couple of the Spanish tortillas on the side and dig in. 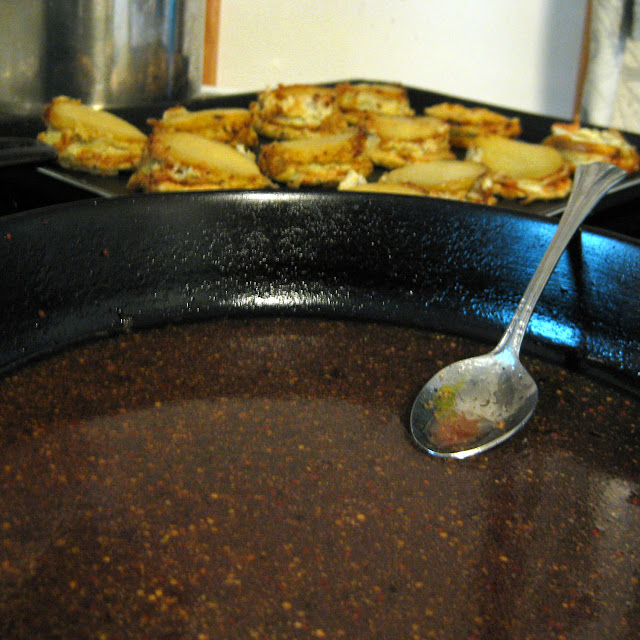 The Fiction
Going Topless
Victor’s mother, Nancy, was shocked when, during their weekly phone call, he told her that he got a job at a topless bar. Nancy gushed about how thrilled she was that he’d finally found work in the big city but in her head she couldn’t stop imagining her son, always the smallest boy in his class, baring his pale ‘before’ chest for all those horny Sex in the City women hopped up on Cosmos and diet pills.
That night, after they had finished their Salisbury steaks, Nancy expressed her worries to her husband Phil.
“I’m guessing Victor gets to keep his shirt on, it’s the girls that go topless.”
“The customers? That sounds worse.”
“No, the girls on stage. They dance topless and the customers give them money.” Phil laughed and smiled, proud that his son, the one who always got picked last for touch football, was getting paid to stare at boobies all day.
“How do you know these things?” Nancy asked.
“I was young once.”
“So was I.” Nancy said picking up the diner plates and heading towards the kitchen. At the sink, Nancy ran the water and stared down at her comfortable sweatshirt, the peonies printed fading into shadow below her breasts. Nancy tried to imagine the girl she once was doing the cha cha without a top on while a group of younger slimmer Phils hooted and tossed quarters at her naked flesh. “It will scar him.” Nancy shouted from the kitchen. “He seems so excited now but it will ruin him. He’ll never meet a nice girl.” She moved to the doorway of the living room, still shouting. “Call him back tell him to quit. Tell him we’ll help him out until he finds another job.”
Phil hit mute on the television. “Let the boy be a man.”
“No, you be the man.”
Nancy handed Phil the phone.
When Victor answered Phil tried to sound convivial but cool. “I’m sorry son but your Mom’s not okay with you working in a titty bar.”
“Huh?”
“Your Mom she told me about your new job.”
“It’s a tapas bar.”
“Yes, I know what a topless bar is.”
“Tapas, you know, Spanish food served on little plates, not topless. Jeez.”
Phil had no idea what a tapas bar was, in fact he was still pretty sure that Victor was just saying topless over and over. He forced a hearty laugh. “You know your mother and her imagination. Never mind, I’ll set her straight. And congratulations son.”
Phil hung up and looked at his wife her arms folded across her chest like a shield.