I made this sorbet a month or so ago but then the arctic blast came and I thought who wants sorbet during a snow storm? I know, it’s only winter in the northern hemisphere but are there pears in Australia? Yes Virginia there are pears in Australia (thanks Internets)! Not that I used actual pears in this recipe. I intended to use actual fruit but the Comice pears (my favorite, in fact the only pear I’ll eat) ripening to creamy perfection on the kitchen table got eaten, straight up- no frills, when I wasn’t looking.

The nectar makes this so easy I felt obliged to spice things up. Two versions. One with hard cider and one without. Both were lovely. Light, not too sweet, with just a hint of heat from the ginger and pepper and a “what’s that secret ingredient?” herbal note from the thyme.  I used a ginger cider for the boozy  (though not really that boozy) version which adds a bit more spritz and a bit more heat. I served the non-alcoholic version after dinner the night I made it and tucked the hard cider version away for a sunny day.

I’d forgotten about the sorbet until I got this cold. Cooking without a sense of smell is frustrating. And I have no energy and yet dinner still has to be on the table so for the last week cooking has been a necessity, a chore. And then there is the sore throat. I’m full on fizzy water and hot tea and PEAR SORBET. Oh sweet delicious cooling find. Just enough spice so that I can actually taste it and so deliciously cool and soothing. And that bit of hard cider? it’s cough medicine alright?!? (plus, on a more practical level, that bit of alcohol helped keep the sorbet from turning to a brick after a month in the freezer)

I hope you like it. If anyone is inspired and does make this with actual fresh pears (Australia? I read on the Internets your pear season has just begun) you might want to add a smidgen of sugar and perhaps some citrus to prevent browning. 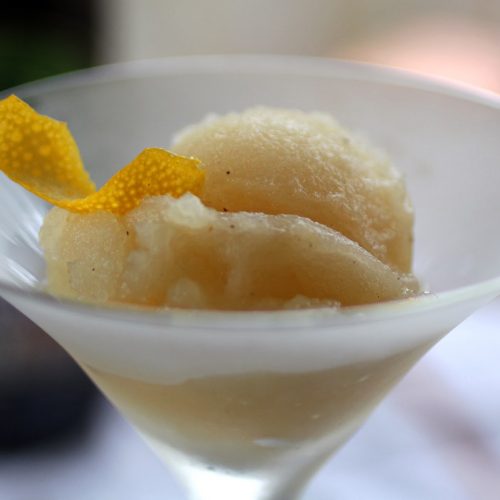