There is something so satisfying about a deep dish quiche baked in cast iron. The tender crunch of a savory black pepper olive oil crust stuffed with hearty bites of ham and melty sharp cheddar cheese. Simple enough for a week night meal. Impressive enough for guests. Gratifying for even the hungriest diner. Serve with a simple green salad. Here’s proof positive that real people eat cast iron quiche!

I bought a lot of eggs this week. I tend to stock up this time of year.

There is something comforting, when approaching the darkest months, about having lots of supplies on hand. If I bake it the sun will come.  There was a sale at the supermarket and then I actually made it down to the farmers market today and was able to get some local farm fresh eggs. I’ve been craving savory tarts like this potato onion tart. But one lousy egg?  And all I’ve had to eat today is a smoothie. Which was delicious, but I should’ve had lunch. One should always have lunch, especially if breakfast was a smoothie.

Looking for other things you can make in your cast iron?

Some of my favorites include this flourless chocolate cake and this cornbread tamale pie (yes it does have tomatoes in it, but it’s a short cooking time so fear not with well seasoned cast iron!)

options and methodology and such 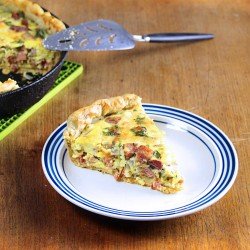