This chili is dead simple. Beans, water, spices, tomato, onion, and ground chicken. Satisfying comfort food. What takes it up a notch is the garnish. Beyond garnish, the cold components of the dish. But that sounds awfully Top Chef for this humble home chili with nary a fresh herb in sight. You decide. Avocado, cilantro, Greek yogurt, shredded sharp cheddar cheese, and a sprinkle of Aleppo pepper.

Added bonus: Anasazi beans cook from dried to done in less time, are reputed to cause less gas than regular beans, and are higher in fiber and iron than Pintos.

I’ve had some issues with the beans in the chili not being done when Dad is ready for dinner. Before my father moved in with us this didn’t matter- we just ate late. The mister would do great in Spain: snack, (optional) snack, big lunch after two, (optional) snack, dinner at ten, and bed around 1 am. Dad, on the other hand, leans more towards the Dutch way of thinking with dinner at 5 or 6 with plenty of time to digest before bedtime. So I try to compromise. Which means that once or twice in the last two years the beans have still been slightly toothsome when served.

This prompted two things: a debate about whether or not salting the water slows down the cooking process (it doesn’t, but try telling that to a hungry 84-year-old man) and the recommendation that we buy Anasazi beans, which Dad insisted cook up considerably faster than black beans or pinto beans. I’ll admit I did not really believe Dad’s claims but the main reason I didn’t run right out and buy some Anasazi beans is that I have a 25 pound bag of black beans in the basement.

I suspect that Anasazi beans are probably available in the bulk section at one of our many local supermarkets but I kept forgetting to look which meant that Dad became convinced that the only place you can buy them on the entire west coast is the Ashland Co-op because that’s where he used to buy them when he lived down south. So a couple of months ago when Dad was in Ashland he went to the co-op and bought 5 pounds of Anasazi beans. We now have A LOT of dried beans.

Flash forward to late yesterday afternoon when I realized that I was going to make chili for dinner but had neglected to soak any beans, let alone start a pot cooking. (after posting this I read an excellent article in the LA times debunking the need to soak beans at all, so never mind) Then there was the moment of panic where I couldn’t for the life of me remember in what remote corner of the kitchen cabinets I had shoved that bag of beans dad brought home from his trip. Fortunately it’s a big bag of beans so the search was short. I did a quick soak and what do you know. Two hours later the beans were tender so I threw in the rest of the ingredients (Tomatoes are what slow the cooking time of beans down, FYI) and chili.

This chili recipe is merely a suggestion. You can sub chili powder for the mix I used. Add some oregano. Sub out beer for some of the water. Add fresh chili peppers of your choosing. Add some finely chopped onion to the garnish.

This makes a lot of chili. Not enough to feed a small army but, perhaps, a platoon. 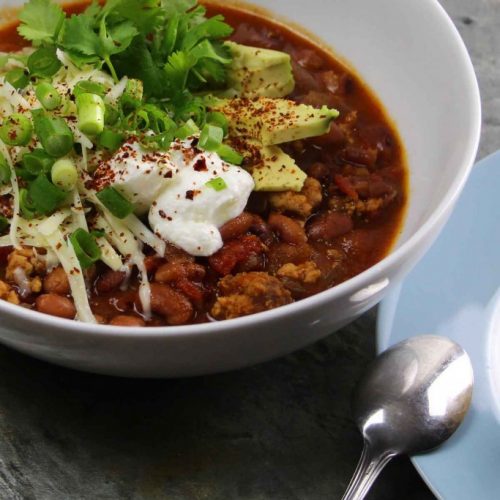 A nice summary of Spanish meal times can be found on parTaste with enough mouth-watering pictures to make you want to catch the next plane to Spain.

National Geographic has a fascinating article about Aleppo pepper up on their site. I ended bookmarking the whole Future of Food series. Hotels made of salt! How chickens changed the world!