These easy to make and easy to scale pickled sweet hot cherry bomb peppers are my go to put on everything condiment. Hot and just a little sweet they add a burst of color and flavor to pizza, pasta, salads, or a a charcuterie platter. You can make a single batch- just one jar!- as outlined in the recipe, or scale it up and preserve the whole peck of pickled peppers. It’s the end of October but even though I’m wearing a wooly hat indoors to chase the chill I can still find bags of peppers (both sweet and hot) at my favorite stand at the farmers’ market. And so, like a fat squirrel foraging for winter, I continue to stuff my pack with pecks of peppers. So much hot sauce, harissa, and pickles, pickles, pickles. To my delight and surprise in addition to the variety bags there were two pounders filled with cherry bombs. Like poblanos, cherry bombs vary in heat, you never know how much tickle or tingle you are going to get after that first burst of pepper flavor. That’s part of the fun.

The homemade version are a little hotter (you could remove the seeds and pith before pickling to make a milder version) and a little less sweet than the trader joe’s variety I usually buy.

You can make these as a refrigerator pickle or cut the initial cook time to just a few minutes and “can” them instead. I sterilize my jars for both but I also use my refrigerator pickles waaayyyy past the “keeps up to six weeks” recommendation on most recipes. That said, once I crack the jar it rarely takes longer than a week to empty it.

Why? Because I stuff them with soft cheese and put them on snack boards, or slice them for a flavorful garnish with crackers and cheese. They compliment dill pickles on burgers or sandwiches and are awesome in all the salads (green, potato, tuna, pasta, egg).

These sweet hot cherry bomb peppers refrigerator pickles are a slight variation on the kitchn’s “quick pickled cherry peppers” you can make further variations on the theme by adding peppercorns, or red onion (makes a pretty purple hued brine and the onions also work well on charcuterie platters).

After posting this recipe last year I made several more batches of these sweet hot cherry bomb peppers. But since the pepper season continued well in to November I did ultimately decide to process the pickles in a hot water bath in order rest a little easier when I opened the jars up several months down the line. I’ve included that option in the recipe as it has now become my go to method for pickling peppers.

I like the National Center for Food Preservation and The University of Minnesota Extension. Both take you through the basics and all the details that I don’t have the patience or the inclination to process and repeat here. 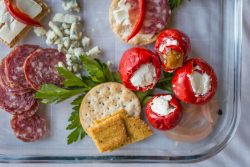 This will just fit into a pint size jar, with brine leftover. for a complete guide to using boiling water canners please visit the national center for home food preservation
Tried this recipe?Mention @recipefiction or tag #recipefiction!