An autumn squash pie made with fresh roasted kuri squash (or your favorite pumpkin type winter squash), a not quite pumpkin spice blend of spices, and a don’t ask don’t tell one hundred percent deliciously graham cracker like honey whole wheat flaky pastry crust. Best of all this bad boy bakes up in an 8” cast iron skillet, making it (like the pan it is baked in) both smaller and sturdier than its traditional pie pan shaped cousins.

The literalist in me can’t call this pumpkin pie even though the seasonings are decidedly in the ‘pumpkin pie spice’ camp, a category that now includes everything from pasta to bed linens (I made the sheets thing up but it might be true, we live in crazy times).

About the amount of sugar in the filling

I don’t like things sweet and so between the slightly sweet crust, the ginger whipped cream (oh yes! read about that next) and the filling I found the pie too sweet so I made the second one with only 1/4 cup of each sugar instead of 1/3. That said, my testers of the first pie said the sweetness was just right for them.

If a honey whole wheat pie crust isn’t your thing…

What about those winter squash?

I used a combination of Kuri squash, which has a smooth rich colored flesh with a subtle nutty taste to it,  and an acorn squash variation, not stringy like regular acorn squash and nicely sweet but pale in color. I was recommended the long island cheese pumpkin and I’m going to give that a go next. The squash is up to you- anything but the jack o lantern variety. I’ve used sugar pie pumpkins in the past but wasn’t that impressed, the kuri have a better color and flavor.

How you roast is up to you. I cut them in half, remove the seeds (roast those up too!!) and bake cut side down on parchment paper at 350F until the flesh is tender to the touch. I begin checking at about 30 minutes, literally poking to see if I can easily leave a mark. Sometimes I add a little water to the pan.

There will probably be more roasted squash than you need for the pies. It freezes well. Use it later for more pie or breads or pastas! 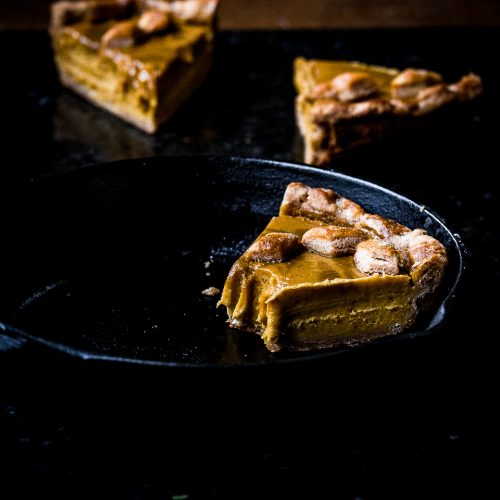 for the crust in a food processor

for the crust by hand

roll and par bake the crust