If you’re still with me after the title than you must be ready for a holiday cocktail with just a hint of nog. Cranberry simple syrup adds a bit more holiday cheer to this bubbly frothy combination that tastes better than it looks and better than it sounds because gin and egg nog sounds just weird.  And then I had it. I’ve made two versions of the eggnog fizz, one with gin and one with rum. And it’s part of the holiday drink rotation now!

I doff my hat to the clever mixologist at Eastside Distillery came up with the eggnog gin fizz. The version that inspired this was made with lemon pelligrino rather than fizzy water and cranberry simple syrup and had a much more pronounced citrus floral note to it. Barely a note of eggnog, just a soft whistle of carolers out in the snow.

Think Pink! The rum version of the eggnog fizz cocktail, after the cranberry simple syrup had a chance to sit and gain color and flavor, was decidedly pinker than it’s gin cousin. I”m not scared of a pink cocktail but if you are try lemon instead- either using a lemon soda like the original fizz or by combining simple syrup and fresh (or bottled) lemon juice.  Or, I’ve not tried thiss, but I’d be willing, use another flavored simple syrup like…

If you don’t already make your own simple syrup, straight up or flavored you might want to. It is, as its name suggests, simple. Equal parts boiling water and sugar. I simmered the syrup with a handful of fresh cranberries for about two minutes until the first cranberry popped and then after allowing it to cool used my hands (because I’m at home and I washed them and no one was looking- but you can used a potato masher, or cook the mixture longer and strain it like Matt over at Nomageddon do) to crush the remaining berries enough to release the color and flavor but not make sauce which is what you will get if you cook it too long, I used 3/4 cup each of  water, sugar, and frozen cranberries because I didn’t want left overs but you can scale up or down to your hearts content.

I used homemade eggnog that already had some rum in it (similarly, Eastside distillery used their holiday liqueur) but if you are using your favorite store bought adjust accordingly- as noted 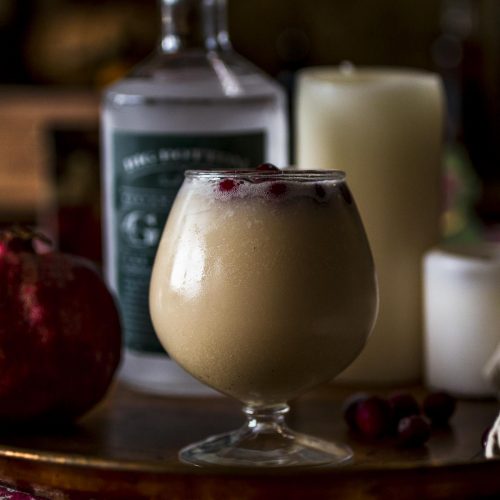