I’ve made variations on this chickpea chili from scratch and I’ve made it using canned chickpeas and tomatoes because sometimes dinner needs to come together in less than thirty minutes. But with a few additions, like the spicy cilantro cream, that add flavor and complexity the sum seems greater than the parts.

Remember last weeks roasted onions? They’re back for thickness and a subtle sweetness and as always just their onion goodness. Vegetable or chicken stock could be added instead if you just want this now.

as written this is not a mild mannered chili, it slaps first and asks questions later. If you want a tamer chili cut down on the spices and eliminate the jalapeño from the cilantro cream (or just use the tip) 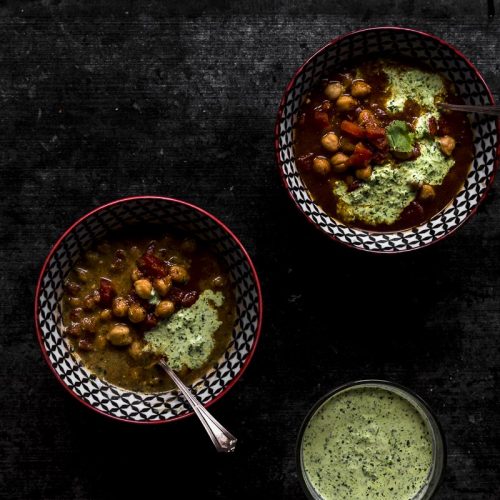 for the cilantro cream

while the chili simmers make the cilantro cream