A recipe written for one person (yes, you can brunch in style by yourself). Whether you dine alone or double the recipe this easy hollandaise uses the leftover egg mixture from the savory french toast so no leftovers!

how long this takes depends on how long you want to soak your bread, since I use a slice of sourdough rye straight from the freezer I like to give it about ten minutes per side- the perfect time to make some coffee or tea, empty the dishwasher, shower, shave ( I left one “s” out but you get the idea). Active time is minimal- even with the slow soak and a slow cook the whole thing was 40 minutes start to finish.

My favorite bread for regular french toast is challah or baguette. I imagine both would also work here for the savory french toast.

about the hollandaise sauce

I have a temperamental electric stovetop so I’m not sure how the lowest setting indicated to thicken the hollandaise sauce will translate to your stovetop, keep an eye out. you could use a double boiler if you’re worried about the sauce breaking. I tried this three times and never had a problem using the butter pan ( an all clad sauté pan, lighter weight than cast iron ) 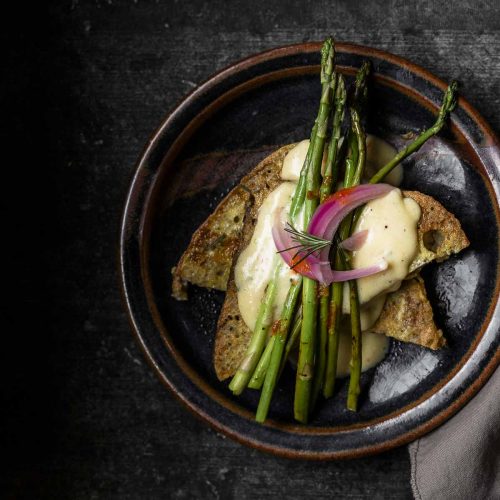 Savory French Toast with Hollandaise for One

while the french toast cooks