Fresh Asparagus and chives together with Swiss Cheese in a brightly flavorful turmeric paprika all butter crust- this quiche, baked in a cast iron skillet, is the perfect brunch or eggs for dinner meal.

This is a variation on my favorite quiche, the cast iron quiche that started it all.

Asparagus season begins for me when I just can’t eat any more leafy greens. I’ve got a high tolerance, love even, for kale and collards and swiss chard (okay, I only just like swiss chard)  but sometime in February I get bored and break down and buy asparagus from somewhere south. The guilt sets in, I vow to only buy local. I slip at least once more and then the season actually begins here- fresh local asparagus. And we eat it until we can’t stand it anymore (which happily usually occurs right around the same time that asparagus season here ends).

I’ve got another week in me.

notes on ingredients and choices for cast iron asparagus quiche

I like my vegetables crisp- it’s how I was raised. Properly washed and trimmed I’ll happily snack on raw asparagus.  So, if you- like my very dear friend Missy from high school- were raised on canned asparagus and like it cooked through. You might want to sauté the asparagus bits before adding them to the filling. To keep the bright green color you could go the extra mile and steam and then shock the asparagus in ice water.

Not listed in the recipe are the prosciutto florets atop my cast iron quiche because without the ham the quiche is vegetarian.  That said the floret bits were my favorite bites

I used a 10 1/2 inch cast iron pan – if your pan is slightly smaller you can make the crust a little thicker but you will want to eliminate an egg or two.

speaking of rising, sometimes my quiches expand mightily and then fall. this doesn’t bother me so I’ve never tried to fix it. 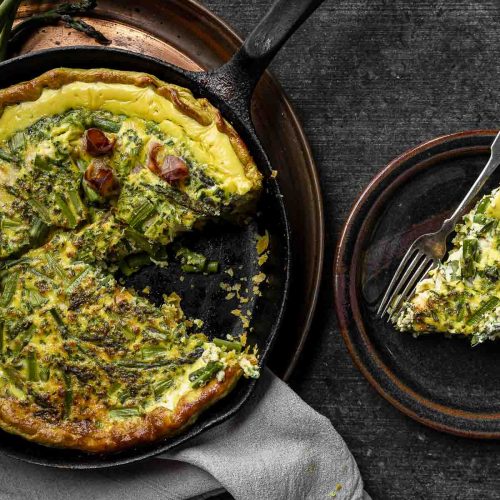