inspired by Mexican street corn but definitely not the traditional dish this quick corn recipe takes advantage of the season’s sweet fresh corn. If your grilling have this on the cob or if it’s raining or buggy or you don’t like your corn on the cob try it in a pan- either way this sort of Mexican street corn dish is the perfect of sweet corn, tangy lime, savory cheese and the all important food groups- butter and mayonnaise.

here’s a clip of a elote vendor in Oaxaca in action- (the corn part is at 31 minutes in) what he serves is a meal what I’ve got here is a side. He is very generous with the mayo- he also uses all the sauces- tajin and a combo of smoked pepper and regular hot pepper sauce.

while a traditional Mexican street corn recipe calls for crumbly cheese I used fresh grated Romano, some other recipes call for feta if you don’t have cotija but others call for parmesan.

I also eliminated the crema (or sour cream) and opted for just butter and mayonnaise spiced up with lime juice and chili powder.

I’ve included cob on and cob off instructions. If you have grill and want to get a little bit messy the cob version is always more fun but it is best eaten out of doors where when cheese and butter and bits of cilantro careen off the cob and onto the ground it doesn’t matter so much. If you prefer to use utensils the skillet version is the way to go. Or if it’s winter use frozen or canned (the canned corn from Trader Joes is shockingly good)

these small batch fritters use all the summer veggies

some options for serving your sort of Mexican street corn

corn is at it’s peak now- fresh from the field I like it just heated through but I also like fresh asparagus almost raw so I might be quirky that way- I suspect its a family trait. If you like your corn more cooked do that cook it more. IN the skillet saute with a bit of water to steam through before adding the sauce and browning- on the grill it will be more charred which isn’t a bad thing or you can pre-boil the corn before finishing on the grill.

this recipe is designed for two people- I don’t like crowds. but it can easily be expanded 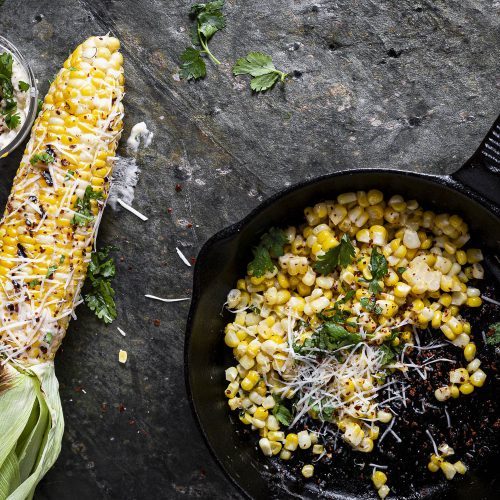