Pasta and mushroom cream sauce – though technically without cream, a white sauce made umami delicious with a healthy portion of fresh chanterelles and just a hint of salty parmesan.

This comes together in less than a half hour and served with a simple salad (think butter lettuce and oil and vinegar) makes one wonderful meal.

This is one of those meals I’ll eat on my own when I’m cold and tired and feeling lazy. This is also a meal I’ll make for the friend that stops by unexpectedly (actually that never happens, not the lunch but the unexpected)- because chanterelles are often unexpected gifts just like impromptu (I do impromptu better than unexpected) lunches with good friends.

That said, I am not in the club, the know, the society of foragers and found things. Mushroom hunting grounds are secret sacred spots. Everyone seems to have one and they will not share, they will gloat and occasionally dole out a bag or two of golden chanterelles (it’s been a good year for us in the mushroom gift department!) but not say where they got them except in the vaguest of terms, a wave in a direction, a gesture towards the hills.

Not that I trust myself to correctly identify any mushroom out in nature, other than a morel, and no one wants to be that person, the one that inadvertently poisoned their friends and family. When I was little we would bring mushrooms of questionable origin to my Aunt Sally for identification- thinking about it now I’m not sure how she acquired her mushroom knowledge but she always seemed to have an answer.

If you want to forage for your own mushrooms

and this article is all about foraging for chanterelles

Other recipes for chanterelles (or mushrooms in general)

I just finished listening to the first episode of Cooking by Ear “Frances McDormand and Risotto”. It turns out she can’t get anyone to show them where they forage for mushrooms either. Also, it was one of the better cooking shows I’ve ever watched and it was audio only but somehow more- the talk of chanterelles was enchanting. It’s not asparagus season but I’ve gotta try that risotto soon.

This heartier version with guinness is great for lunch or dinner

Or for breakfast for two try this biscuits and mushroom gravy 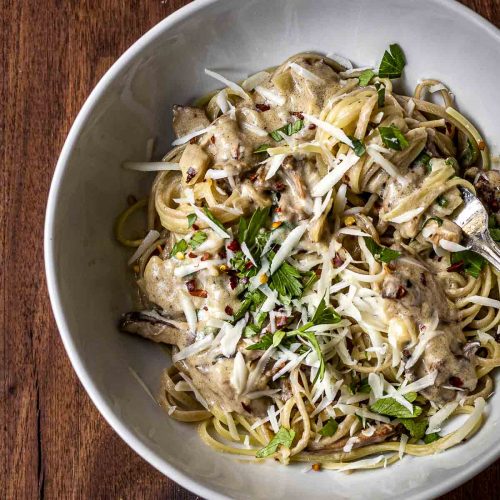