More recipes for you to try

Brandy Manhattans for everybody

Pomegranate molasses? I buy mine at my local World Foods market- but if you don’t live in grocery nirvana it is easily procured online. And it’s so good on salads or in cookies or in cocktails. Concentrated cherry juice would also work but I like to use what I have on hand. Speaking of

I used orange liqueur and brandy, you could use Luxardo Maraschino liqueur but now we are talking a whole new recipe. I also one batch with almond liqueur (amaretto) instead of orange which was nice too.

Did you know the cherry (not the maraschino I grew up with but the Luxardo preceded the olive?!  At least according to this Daily Beast article all about garnishes. 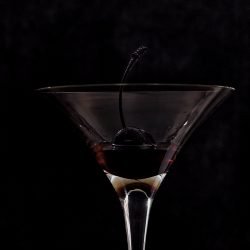 this is for one jar of homemade cocktail cherries- I made mine in a sous vide but you could use a hotter water bath for a shorter time (15 minutes) or just heat the liquid ingredients and pour over into a sterile jar and refrigerate for about a week.
Tried this recipe?Mention @recipefiction or tag #recipefiction!