Why whisk when you can shake? One jar, one spoon, no real recipe but a song. That’s right I make my whipped cream in a mason jar. That’s right I like Hall and Oates. Cause darli’ you, you make my dreams come true.

This holiday season is different- we had Thanksgiving for two.

I served ham instead of Turkey because without guests there was no ham lover to bring the “I know you said not to bring anything but…” ham and all the reasonable sized turkeys were bought by people who plan.

Also, I might have to to get a tree because there will be no Christmas visit to my brothers’ house where there are usually two trees (once you start a tradition like two trees at Christmas it’s hard to go back).

These are holidays without a recipe, without a grand plan because it is a terrible year for making grand plans but it’s an excellent year for gathering the basics (be it knowledge or ingredients or the happy combination of both) to wing it with what you’ve got.

You don’t need a recipe if you know how things work. I don’t wing it with cakes because I don’t make them enough to have that knowledge (and they’re fussy) but pizza dough or biscuits or a cocktail? Improvise, modify, sometimes be willing to settle for real good not amazing.

You can’t whip egg whites in a blender but you can whip cream in a mason jar.

There are a few rules.

Don’t over fill, you need room to shake.
Cold heavy cream and a cool to cold jar. I don’t chill my mason jar but my kitchen is in the low to medium sixties (Fahrenheit) in winter.
Limit the other liquids be it bourbon or vanilla or maple syrup (i’ve added all three at once which was delicious but tasted like none of the above) 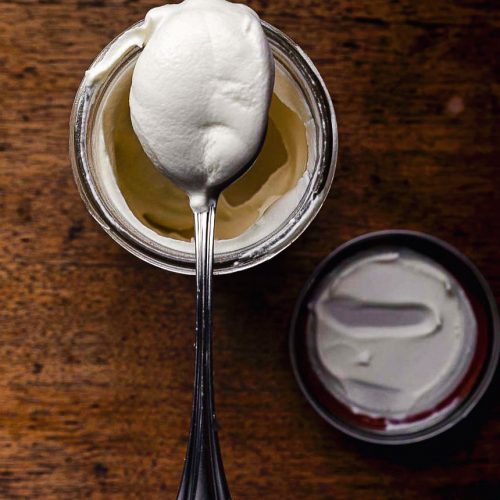 all you really need is heavy cream and a mason jar with a lid. things that make it better are a good beat to shake to and some flavors to add.
Print Recipe Pin Recipe
Prep Time 5 mins
Course Dessert
Servings 2 cups

Mini Pumpkin Cheesecakes
A pumpkin cheesecake with homemade graham cracker crust that's scaled down for small groups. Baked in a six muffin tin sized pan and mixed in a food processor.
click here for the recipe

your flakiest pie crust ever click here for the recipe