“Heads, we get married; tails, we break up.”

“Huh?” Asti looked up from his menu and stared at the quarter resting in Lilly’s right palm. He knew her name was Lilly because it said so on her name tag. “Can it wait ‘til after breakfast? If we break up now you might spit in my eggs and if we’re getting hitched I would feel obliged to take you away from all of this.”Asti waved his index finger like a wand over the faded Formica tables and cracked vinyl booths.

Lilly smiled for real this time and the blue in her eyes bloomed like an exotic night flower. On any other day Asti might have married her, but he had a rule about falling in love when he was working.

Lilly was what Asti had come to expect from waitresses at country diners—pretty in a faded way, bleach blond hair in a messy ponytail, and a generic, waiting smile. When she called him “Hon” he wondered if she got her ideas of what she was supposed to be like from watching television.

“Cheapskate left me a quarter.” Lilly said nodding towards the Italian suit and loafers headed towards the bathroom. “His left shoe cost more than my car and I get this. Thought my luck might change with you.”

“You hoping for heads or tails?” Asti asked, feeling the weight of the pistol holstered to his chest.

“The chance to leave all this. What do you think?” Lilly smiled for real this time and the blue in her eyes bloomed like an exotic night flower. On any other day Asti might have married her, but he had a rule about falling in love when he was working.

“How long you been here?” he asked, eyes flitting between the menu and her face.

He nodded and she flipped the empty cup on his table over and filled it from the pot in her left hand.

“What’s good?” Asti watched the Italian suit leave the bathroom and head for the exit.

“Sure. Sunnyside up, steak black and blue, wheat toast dry.” Lilly slid the quarter in her apron and nodded. “I left my phone in the car, will you wait for me?” Asti asked.

Lilly headed towards the kitchen and Asti slipped a neatly folded hundred-dollar bill under his coffee cup.

Asti’s sedan was parked next to the Italian suit’s Porche Boxster in the far corner of the lot. The diner was the only structure in twenty miles, a low-slung box squatting in the middle of seemingly endless desert. It was early morning but the sun was already hot. Asti trotted to catch up with the suit.

Keys in his hand, the Italian suit turned to face the voice, almost familiar, just a few feet away.

Asti pulled a quarter out of his pocket and tossed it towards heaven. “Heads we get married,” he said. “Tails, we break up”

“Do I know you?” The suit asked as the quarter spun at his feet.

Asti moved within inches of the suit and both men stared down at the coin lying in the dirt.

“We’ve got Lilly in common and some mutual friends back east, but know me? Not really.” It was tails. “And it looks like you’ll never get the chance. Go ahead, take it.”

The suit seemed scared now. “I said take it.” Asti pointed at the quarter, his voice hard.

The suit kneeled down between his car and the sedan and Asti pulled out the gun and got blood all over the suit’s expensive loafers. “Shame about the shoes man,” he said, shoving the suit onto the tarp waiting in his back seat. And before his eggs could get cold he was back on the road, headed out into the seemingly endless desert. 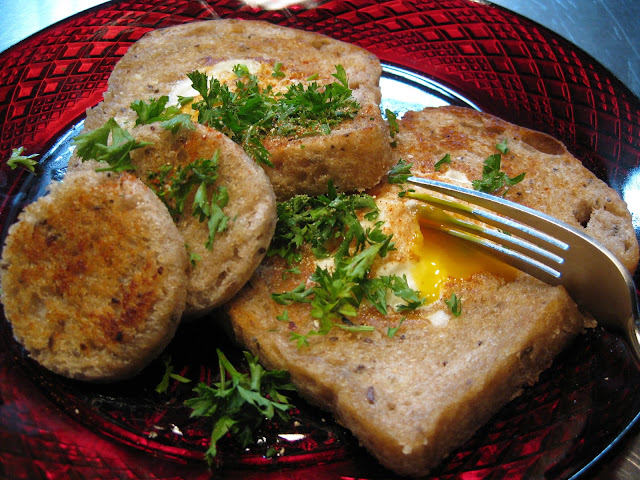 The recipe of sorts

The tip I’d like to share to get your egg whites cooked through and yolks runny every time! A tip I got from reading FICTION. Alas, I can no longer remember the story (anyone? post in the comments if you know!) but there was a character who liked her yolks in the exact center of the whites so she would start the whites first and then carefully place the yolk in the center. I’m not that particular. But I do like my yolks runny and the whites cooked through. Finding a little uncooked globule of white gives me the heebie-jeebies.

Start the whites first! Not necessary for fried eggs, unless you really want the yolk in the center ( I’ve tried, it’s harder than it sounds) but any time the egg is contained it’s nearly impossible to get the white completely cooked and leave the yolk runny. Unless you put the whites in first.