Every Sunday the mister makes us waffles. It is his meal, the only one I haven’t taken over. He used to make dinner from time to time but when he cooks we eat late. After three or four midnight meals (really!) I started making dinner every night. Sometimes I get up early and have a morning snack on Sundays but waffles remain his domain.

Last weekend we only had time for half a waffle each so I put the batter in the fridge where it has been staring at me ever since. Yes staring, your leftovers don’t cast accusatory glances? Mine do. Maybe that container of leftover rice just has resting bitch face but I don’t think so, I think that rice is judging me for using up the waffle batter instead. I’m glad I did.

I wish I could give you that recipe because the waffles were delicious. I could it would go something like this: combine two cups of five-day old waffle batter (the joy of cooking recipe) with ¼ cup finely diced yellow onion and a teaspoon of minced fresh rosemary. Stir to combine and then add approximately two tablespoons of refreshed sourdough starter and some fresh ground black pepper. Thoroughly combine and then bake the waffles. The starter was perky enough that it gave the batter some rise and the gluten had relaxed enough (five days in the fridge will do that) that the waffles were incredibly light and tender. Just enough savory to accompany the orange hollandaise or be the perfect side for fried chicken. Since I was cutting them into hearts I took the scraps and dunked them in the hollandaise sauce.

The hollandaise sauce pictured with the waffles could have been a little smoother. I was trying out a lighter version because anyone who had ever made homemade hollandaise knows two things. 1) hollandaise is freaking delicious and so 2) you shouldn’t know how much butter and egg goes in there. But once you make it at home you can’t forget. I’m not afraid of butter or eggs but hollandaise startles me-it’s a once a year sort of thing. In the first version the flavor was there but the technique seemed overly fussy. So I made hollandaise again today. Thank goodness it’s a lighter version. I made the second batch using the blender. Much easier and had a much nicer consistency. Here is an excellent video from Ina at Food Network that outlines the process.

This video from the kitchn is an awesome primer on poaching eggs. The most important thing I learned was to use a shallow pan, so much easier to get the egg in and out. And four minutes is perfect for a cooked white and a runny yolk. Being able to just set the timer and prep other things makes poached seem much easier than it used to.

instructions/suggestions for timing and assembly 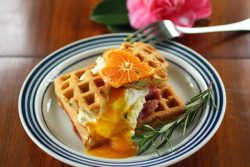