This is our go to bread. For a printable recipe click here. I shape it into loaves for sandwiches and toast. The Mr. survived on it when I went to Maine for the summer. It takes two days, three if you don’t regularly refresh your starter. Sometimes the loaves are pretty, sometimes (when I let the starter go an extra day) the loaves look more like sad cakes, but they are always delicious. 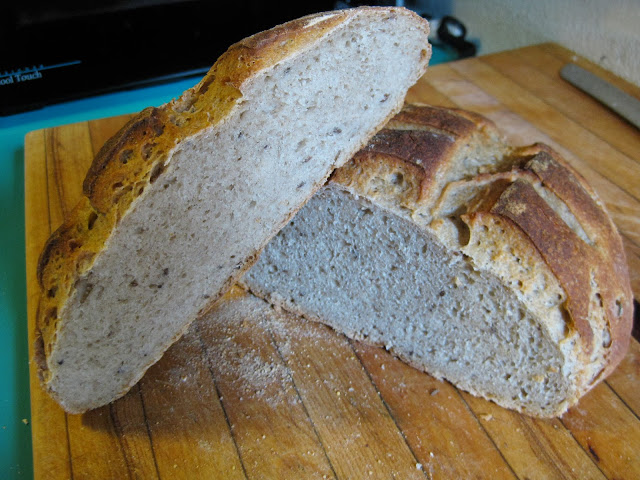 Add a couple of tablespoons of dried onion flakes to two cups warm water- allow onions to soften.In a large mixing bowl (I use the KitchenAid mixer) combine water/onion mixture, starter, and 20g caraway seeds. Break up starter into water.

The ratio of whole wheat to all purpose or bread flour varies depending on my mood and what I have on hand but generally I use about 290g whole wheat and 500g all purpose.

Do a short mix to incorporate the flour.

Mix again for about 3-10 minutes. Dough will begin to pull together and away from the sides of the bowl but remain somewhat sticky.

Scrape dough from sides of mixing bowl and allow to rest again, covered, for another 20 minutes.

Following the rest, once again scrape dough from sides of bowl and form into a ball. Let rise in covered bowl until double in size- about two hours.

Dump dough onto well-floured surface and divide in half. Form into rounds or loaves. The dough is somewhat wet and requires a bit of a gentle touch.

Allow to rise. Slash if rounds.

Bake for 35-40 minutes. I coat the tops of the loaves with butter about five minutes before the end of baking otherwise they don’t brown.