When crafting a thanksgiving dessert menu I had two goals, use as few dishes as possible and make just enough to share or have leftovers for the next day but not all the days until spoilage. Bonus points for an easily freezable dessert and double bonus points for cheesecake.

I made my own graham crackers so I’ve include a volume measurement rather than an amount of crackers because I suspect that mine are far from standard size.

When I say a pinch I mean about an 1/8th of a teaspoon but often here it’s slightly more because spice should always be to taste. 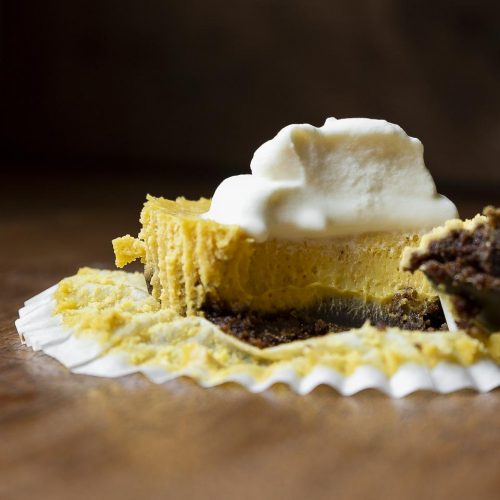 Get the water out of the pumpkin

IF you prefer to use paper towels to reduce the moisture in the pumpkin: Line a rimmed baking sheet with a triple layer of paper towels and evenly spread the pumpkin puree across the paper towels. Press another triple layer of paper towels onto the pumpkin and press gently with your hands to encourage the pumpkin to release its liquid. Set aside. I add a few shakes of the Penzey Garam Masala to gingersnaps, apple pie, pumpkin, pie, and this pumpkin cheesecake alton browns’ graham cracker recipe support cooks illustrated by subscribing to get the original recipe here  or get a detailed walk through of the original recipe here (with pictures)
Tried this recipe?Mention @recipefiction or tag #recipefiction!