I’ve been there, in the freezer aisle of the supermarket, eyeing the frozen cheesecakes but fighting the urge to buy one because I know when I get home I’ll eat the whole thing, still frozen, barely torn from the box. I know because I’ve done it. More than once.

I was younger then and the regret only lasted an hour or so.  But now hangovers last all day and that five pounds doesn’t just disappear overnight either. But this ice cream is good, real good. And simple. So is the sauce- unless you strain out the seeds- but still, no eggs, no cooking. Decadent, maybe a smidge, but easy to share and so much more refined than a cheesecake from the freezer aisle, silkier too. 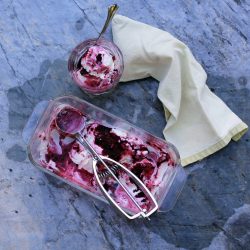