It’s always good to have a few snack items in your arsenal that are easy to remember, have very little hands on time, and can please a variety of palettes and preferences. Socca, the original gluten free flat bread made with equal parts chickpea flour and water and little else, is one of those snacks.

Have it the traditional way with extra virgin olive oil, fresh rosemary, salt and pepper or mix it up. Delicious topped with roasted onion cream (for the vegans) or a generous pile of parmesan (for the cheesy).

Have you ever thought you were getting a slice of mouthwatering chocolate cake and ended biting into a carob, fruit juice sweetened, whole grain flour cardboard textured monstrosity instead? Such was my childhood. And so at a tender age I made vow to never substitute  when it compromises flavor. This is one of the only vows I made as a small child that I have kept. Chocolate cake should be chocolate cake, it’s  easy to make a delicious gluten free chocolate cake. It is impossible to make a delicious carob cake.

It is impossible to make a chewy gluten free pizza crust. It is possible to have a crisp on the outside nutty and tender on the inside flavorful flatbread that in no way resembles pizza crust but is just as steeped in culinary traditions and has been eaten for generations because it tastes good not because it is vegan or gluten free.

Such is socca, the street food from the south of France with a charming history . Also called farinata or torta de ceci, the Italians like chickpea flour flatbread too.  Just like crepes, it’s almost impossible to recreate the giant flatbreads made on specialty pans in charming seaside towns along the Mediterranean but with the basic ingredients and a sturdy cast iron pan you can come close. And since it’s you, you can make the socca as thick or as thin as personal preference dictates. I like mine crispy. Except when I like it just a little bit thicker and topped with parmesan and black pepper. 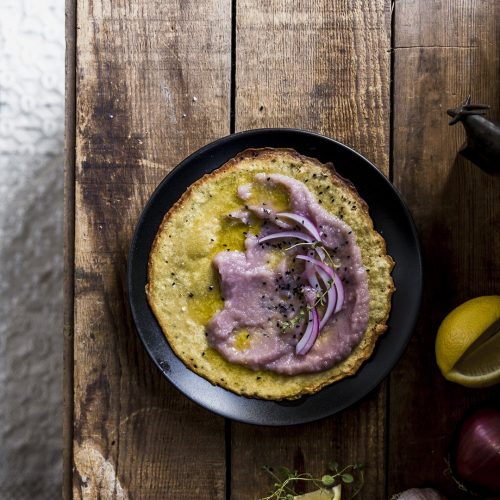 season with just salt and pepper or dress up with flavorful seeds and spices
Tried this recipe?Mention @recipefiction or tag #recipefiction!